GNSS Internet Radio is a great tool for playing network corrections out of your PC’s serial port.

Put just the .exe file in a folder (bringing along other files that may be write protected will hand the tool): 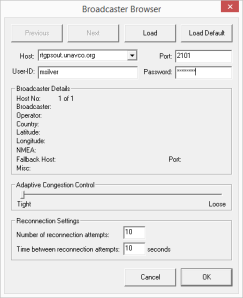 Enter your Host, Port, ID and Password, then click OK. It will take as long as 30 seconds to load a large source table (like PBO Realtime’s):

WAIT! It takes a while to download and sort the table.

If you are going to pass incoming corrections out to a COM port for retransmission, select the ‘COM-Port’ radio button and click on ‘COM-Port Settings’:

If you are going to select a mount point, you need to check the ‘man. GGA’ box and set the GGA output location:

Spoofing a location for a Virtual Base

Enter the Latitude and Longitude in decimal degrees.

On the main menu, choose the correct ‘Stream’: 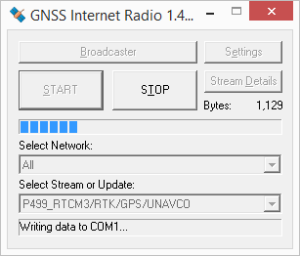 The blue bar will start to move across the screen.

Corrections will be played out the selected serial port.

Used GPS Equipment. How much is it worth?

A reoccurring question that I am asked: “how much is my old equipment worth?” and “How much should I pay for old equipment?”

I have some thoughts…

Consider a ProMark 2 receiver with all accessories. If it were brand new in the box, would it be worth $1,500? (There are several on eBay right now.)

Consider that we are selling X90-OPUS dual frequency static bases for $1,620 brand new. In a case, with good batteries and cables and a 2-year warranty! So if you were to use the PM2 as a base or a static rover, I think the $1,500 answer is clearly — absolutely not. Would you pay $500 for a PM2? Again, I think not. It is worth $1,620 for dual frequency and access to OPUS, so even if you were to give away the PM2, I think it has no value. It is only as a Stop-N-Go rover that the PM2 would have any value. And then, not much

Next consider a ProMark 3, are they worth $1750 for a complete single receiver?

It is the same equation as the ProMark 3, except that the PM3 has additional problems: no IO Pods, no Batteries, no USB connection to 64-bit machines and slow SV tracking. In my book the PM3 only has value as a Stop-N-Go rover.

NO. They can not be worth $2,800. That one could sell for that is a mystery of eBay. Someone got very lucky and somebody else got…well…screwed.

Laptops (which are a similar device) have a lifetime of 2 to 4 years. After 4 years, they have little residual value, typically $100 at most.

The GNSS industry changes quickly. New constellations, new processing algorithms, longer life on batteries are a few of the enhancements that we see on a yearly basis.

So with that backdrop, what are reasonable  general expectations for GNSS equipment?

I personally think that professionals should plan on replacing equipment every 4-years.

This means that you need to purchase equipment and use it. If you are only going to use a base/rover pair twice per year, you should rent. Even though it costs a fortune to rent.

Now, I know that many of my customers have extremely old equipment that they use everyday. I have two customers who are using GG-24 RTK receivers from the 2002 era! Several customers are running entire fleets of Z-Extremes and Z-Surveyors. I happen to know that these same companies always have the latest desktop computers, software and trucks.

Why do they not purchase new GNSS equipment that at least tracks GLONASS? I suppose their current equipment works good enough to get them by.

But, if you are looking to purchase used equipment, please consider these things:

If you are looking to sell used equipment, the best advice that I can give you is to sell it as quickly as possible. Every year that you wait reduces the value of your equipment by 50%!

I am just back from the 2014 Spectra Precision Dealer meeting in New Orleans. It was a blast and there were plenty of BIG announcements.

The biggest announcement is the new SP80 GNSS receiver:

It is about 15% smaller than the PM800 and shockingly it is a ½ lb. lighter (2.5 lbs. total) And that is with almost double the battery life. When you hold this receiver it feels right, the finish is exceptional. The design is simple.

I was impressed enough that I bought four without knowing the price and I have already sold a pair. The receiver is that good.

Best of all, first units will ship on February 20th! This is not some BS date that is going to be delayed for months, these receivers are real.

I will get into details on the SP80 below, but let me describe the BIG picture:

Ashtech’s legendary tracking and RTK performance has not been abandoned. This receiver is Z-Blade based and it runs on $PASH commands. The Ashtech GNSS team lives.

The SP80 tracks six constellations: GPS, GLONASS, Galileo, BeiDou, QZSS and SBAS. The SP80 is unique because it will fully fix on any of five of these constellations or a mix. So you can fix GPS only, GLONASS only, or BeiDou only. Time to fix is 50% better than the PM800, about 2 seconds for a 20-km baseline.

If you don’t think this is a big deal, let me assure you it is. This morning at 10:00 am there were two GPS SV’s above 15 degrees elevation at our office. ProMark 120’s with GLONASS computed locations in seconds, while BD-970 and OEM-6 based receivers struggled for five minutes to get autonomous positions. Most (all other) receivers require a GPS only fix prior to using other constellations.

Clearly Spectra has ended up being a good home for Team-Ashtech. I can tell that they have more resources and I suspect that being part of Trimble, they can throw significantly more weight around when sourcing technology.

I have been wondering about the future of FAST Survey.

Well, the next version of FAST Survey (Version 4.X) exists today. It is based on Carlson SurvCE version 3. (The version I saw was derived from SurvCE 3.80 and had been compiled on Feb 8th.) Not only does FAST 4.X support the SP-80, but it now supports the Focus 30 robot!

SurveyPro also fully supports the SP80. And SurveyPro sports a long list of new features too.

Here are my notes from the meeting:

SMS Messaging (text messages) provide alerts if the batteries are low, or the base is moved.

Anti-Theft Lock: When you set a base you can lock the head. If the head is removed from the location, it locks and starts sending SMS (text) messages and email with its new location. The buttons don’t work and the only way for the thief to get the receiver to stop beeping is to pull the batteries. However when power is next applied, the head will send its location and refuse to operate.

Internal UHF Radio: 2-watt ADL. That is twice the power of most internal radios. The radio antenna connection points downwards into a special fiberglass pole which protects the UHF antenna on the rover. It is AMAZINGLY sturdy. The SP-80 has a uniform propagation pattern, this results in better range without rotating the pole. The 2-watt radio will generate a lot of heat, but it has a big finned heat sink on the head bottom that radiates the heat away from the antenna and GNSS electronics.

The USB connection is the standard mini connector and is accessible from the receiver side. The SIM and SD cards are also side accessible. Thankfully the SD card is full sized! (I can’t manipulate the micro SD cards, I really prefer the full sized cards and my new laptop has a hole that they fit into directly without an adapter.) Between the SD card and internal memory you have 31 gigabytes available. That should be plenty!

Batteries: two standard batteries. When you open the battery door (which you can do with one hand) the batteries don’t fall out on your head. The XP-80 runs for 10 hours, twice as long as an R10 but only weighs 0.17 lbs more?

The serial connector has a power input, so if you are using an external base radio, you don’t need a separate power connector to charge/power the head for extended periods.

Tilt Sensors? The SP80 does not have tilt sensors.

Display: The SP80 display is brighter than the PM800’s and you can set it to never dim. This receiver has the best display of any receiver on the market. You can simultaneously see the SV tracked vs. used count, the battery levels, the correction latency and most importantly the Fix/Float/Auto status.

Serial Port: the serial port is pined to supply power to the head, so a base with an external radio can be directly powered from the radio’s battery without a separate cable.

This receiver is a big deal.

I can’t wait until I get my first shipment (around the 25th of February!) If you are thinking about purchasing RTK, and you operate under difficult conditions, this will be worth taking a look at.